In the ancient times light was seen as a gift given to man: fire had been donated by Prometheus and sight by Aphrodite, the goddess of love.

As the beasts of the Earth were being created, the Titan Ephimetheus, whose name means “afterthought” assumed the task to give each animal some faculty for their protection and survival : to the turtle he gave a hard shell, to the wasp his stinger, to others speed and cunning. When he came to man, nothing was left, leaving him “naked, unshod, unbedded and unarmed” .

Puzzled Epimetheus turned to his wise brother Prometheus (whose name means “forethought”) who stole from Zeus the gift of fire and carried it to mankind that used its light to kindle his civilization, his culture and technologies. For this action he was punished and chained to the mountains of Caucasus where each day his liver, that represents the seat of life, was eaten by an eagle sent from Zeus.

At the same time the God sent Pandora, a seductive automaton fashioned by Hephaestus, the lame craftsman of the gods, to Epimetheus with a box and he greedily accepted it ignoring its evil content. When Pandora opened it against his will, she unleashed on humanity illness, grief and pain so that the gift of fire and all it symbolized became linked with the burden of care.

According to Empedocles, the divine Aphrodite, goddess of love, created our eyes out of the four Greek elements of earth, water, fire and air with little passages to permit it to transmit a fine interior fire through its water to permit sight. Light was coming from inside and proceeded from the eye to the object seen.

His affirmation is not only metaphoric, but also scientific because at that time the light of the sun was considered to have a lesser role, a part of the whole process; something more was required, which was the light of the body.

For Plato, who, like Empedocles, studied the secret doctrine of Pythagoras, the fire in the eye emits a little light that coalesces with the daylight and originate a single body of light. This body becomes a link between the objects of the world and the soul because it allows the subtle motions of an exterior object to pass, causing the sensation of sight .

The mind’s eye is not passive, but its role is really significant in the activity of seeing as Goethe comments in his own Theory of colour (1910):

Were the eye not of the sun, How could we behold the light? If God’s might and ours were not as one, How could His work enchant our sight?

In the Bhagavad-Gita, or song of God, the king is blind and sees through the eye of his charioteer and counsellor, whose spiritual gifts extent his sight. In all these ancient teachings the light of the day makes way for the light of the night or blindness of the inner sight as Plato wrote:

“The mind’s eye begins to see clearly when the outer eyes grow dim”.

The nature of light was clear to Egyptians who believed that the gaze of the Sun-God Ra was the light of the day: standing in the day light was to stand in the sight of their God. In neither case light was a substance or thing, but was believed to be a power of seeing, the possibility to illumine, it was the sight of God. It was an aspect of God and mankind shared somewhat in His nature.

In the Old Testament, on the first day God created light; on the fourth He “made two great lights, the greater to govern the day and the lesser to govern the night; and with them he made the stars”; then he created man and woman.

In the Christian imagination, the fall of man was caused by the temptation of Lucifer and only Christ, the real light of the world, could redeem humanity. In one apocryphal tradition Lucifer and Christ were originally brothers, both high angels of light. A medieval maxim declared Christus versus Lucifer, Christ is the true Lucifer, as the meaning of Lucifer is “bearer of Light” . The Fall of Man follows the fall of the bearer of light, Lucifer, and the birth of the Christ shone the light into the darkness of the world.

Man bears the light within, but, as Plato said, only by closing the eyes he will see the true light and then see with the light of God. 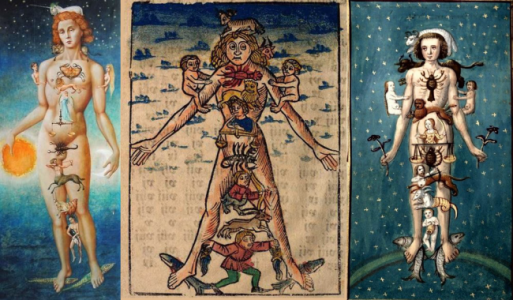 The Esoteric Meaning of Easter and the Resurrection